How Crowdfunding Can Get Your Startup Through a Rough Patch

Entrepreneurship is fraught with challenges. No one knows this better than Kristina Melendez-Thompson, founder of Ita’s Food Truck in Richmond, Virginia. After the rear tire blew on her newly equipped and painted food truck and caused a total loss, Kristina had to launch her startup from scratch for a second time.

Born in New York, Kristina Melendez-Thompson developed a passion for food in her 20s while cooking with her Mom, Minerva (Ita) Mendez. Minerva was born in Puerto Rico and learned to cook traditional Puerto Rican cuisine from her mom and grandma. The recipes Kristina learned from her family have been passed down from generation to generation, and they’re the ones she served from her food truck.

Both Kristina and Ita migrated to Richmond, Virginia, where they found no trace of their beloved, flavor-packed Puerto Rican cuisine. So, they continued to cook for themselves. They also prepared food for other Puerto Ricans and anyone else who had a love for the delights of the region. At that time, they were cooking to share their love of food with the community.

Word spread. They started to get requests, and a small, underground catering business emerged from their informal get-togethers. Then, the two began to get inquiries from corporations in the area who wanted them to cater lunches and events. Unfortunately, they refused the business because they didn’t have proper licensing and were concerned about liability.

That’s when Kristina began to seriously consider turning their clandestine operation into a legitimate business with all the proper licensing. Fortunately, Ita was no stranger to professional catering, as she had owned a small lunch catering service in the past.

Kristina was aware the food truck scene was beginning to emerge in Richmond. And compared to the other options available, it was the most affordable way to launch their venture. She began to do some serious research.

She interviewed other food truck companies in the area. Some were extremely helpful, and others not so forthcoming. She priced truck options and made a list of the equipment, permits and licensing required. She and her daughter, Nina, a college freshman at the time, even made a two-week trip to San Diego, the food truck mecca of the nation. They spent two weeks tasting, learning and researching.

After all the research, delicious and otherwise, Kristina determined they would need about $25,000 to $30,000 to launch the food truck. And that didn’t even include the price of the truck. The startup costs would eat up every dime of her savings.

She asked her mom, “Is this something you want to do?” She knew it would be a dream come true for her. With a “yes” from her mom, the concept for Ita’s Food Truck became a reality. All they needed to do now was get a truck.

Kristina and Ita discovered they could purchase a gently-used truck from USPS. They found one in excellent shape with low mileage, so Kristina went to her bank and applied for an equipment loan. Since Kristina worked for a bank, she was savvy about credit and knew her credit score was high enough for her to qualify. She had to guarantee the loan personally. Now, Kristina was all-in. With all of her savings invested and her credit score on the line, they purchased the mail truck and took it to be painted and equipped.

The truck and logo 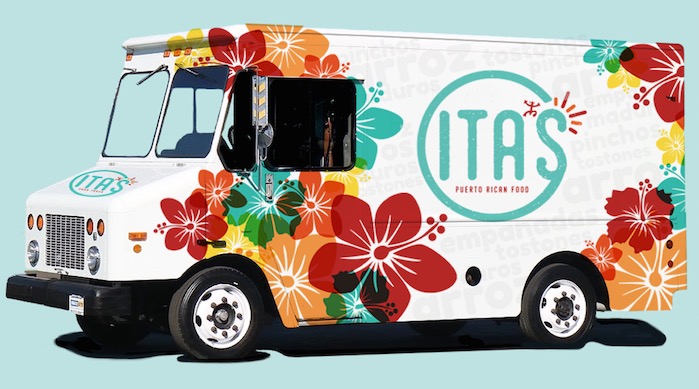 Kristina handpicked every piece of equipment, from the refrigerator to the pots and pans when it came to the interior and layout of her food truck. There were so many details that required her attention.

While the truck got its new, shiny stainless-steel kitchen, Kristina began to have Ita’s logo designed. When Kristina explains the little nuances in the design, you’ll see it delves deep into Puerto Rican history and the family’s roots.

The hibiscus flower is Puerto Rico’s national flower, and its presence on Ita’s food truck pays homage to the heritage of the food and Kristina’s family. Kristina knows her business is all about her community, and to give back, Ita’s donated 10 percent of its proceeds to the community.

On Aug. 9, 2019, Kristina was headed down the 64 West toward the 288 to a catering job. The truck had a refrigerator stocked with groceries and the propane tanks were full in preparation for a full day of cooking and serving food.

As she drove, she heard a loud explosion. At first, it didn’t register with her that it came from her truck. She said it was much louder than the sound a car tire makes when it blows. Then her vehicle began to fishtail, and she realized she was in serious trouble.

Kristina and her new, fully loaded food truck were headed right for the freeway guardrail. She hit the brakes and instantly realized her mistake as her truck began to rock from side to side, threatening to roll.

Kristina managed to miss the guard rail and head for the next exit off the freeway where she drove the truck up a grassy embankment. However, the truck was going so fast it caught air on the way up the embankment, hit the ground hard, and then rolled twice.

Miraculously, the truck landed upright. Kristina was in shock, and her eyes and mouth were full of shattered glass. She tried to open the door and flee because she knew the danger of explosion was real with a full tank of gas and propane on board. Since the windows were busted out, Kristina made the adrenaline-filled decision to jump out of the window. Then, she ran as fast as she could away from her totaled food truck and her dreams.

Ita’s food truck, and Kristina’s business she had worked so hard to build, was a complete loss. Kristina and her mom were devastated. Many new entrepreneurs would have given up. But Kristina is made of sturdier stuff.

It was then that she decided to launch her business for a second time.

Crowdfunding to the rescue

Courtney Sargent, a friend of Kristina’s, spearheaded a GoFundMe campaign for Ita’s food truck. Kristina was unaware of the fundraiser until her family surprised her at her granddaughter’s third birthday party.

The community donated a few hundred dollars in the first few days of the campaign. Then the media caught wind of the fundraiser and the accident. Donations skyrocketed to over $3,000 in one day. That momentum helped Ita’s GoFundMe campaign to surpass its goal of a modest $10,000, and (at the time of writing this article) the donations are still pouring in.

Because Ita’s gave so much back to the community, other fundraising efforts have materialized. The food truck community held an event in which all food trucks that attended donated 10 percent of their proceeds to help get Ita’s back on the road.

With the crowdfunding success, the outpouring of community support, and the insurance from the food truck, Ita’s 2.0 will soon launch for the second time.

The story of Ita’s Food Truck is an important reminder of the trials and tribulations that a startup can experience. If you’re launching a venture, Kristina’s story can demonstrate how crowdfunding can be a valuable financing resource, and her experience may help you persevere when the road gets rough.